It's always a good idea to constantly load test your application so you can spot a regression in performance. That's easier said than done some times: load testing used to require specialized tools and vendors. When I was in the partner space, one of our customers used to load test their solution on every major release to the tune of $20,000 a pop.

Fortunately, a colleague pointed me to Locust during one of our projects. Locust is a lightweight, Python-based tool for putting load on your application. A few things that immediately drew me to it:

Locust doesn't do code profiling, or true end-to-end performance metrics. But it does exactly as it says on the tin, and it does it well with minimal overhead.

It had been a few years since I'd used it, so when I started poking around to see if it could help a customer I'd been working with, I was really excited to see that you could do some very powerful testing by paring it with Docker.

Just a quick note: I've posted all of the files I reference below on GitHub here. If you're looking to get started quickly, you can grab those files and change the scripts as you read on!

Getting Started with Docker and Containers

You'll start off by installing Docker. Docker enables and manages the running of virtual machines in containers. This allows for rapid provisioning/de-provisioning with lightweight Linux containers that can run on any modern OS.

First, we need to get an image from Docker Hub with Locust installed. This article by Scott Ernst served as most of the inspiration for this post, as he had already done the legwork of writing up the process and creating the base containers. I'll sum up the process I used after reading his post, but his writeup is also a great read.

From an admin Powershell prompt ( I assume you're testing from a Windows host if you're a Sitecore developer. If you're not, you're smart enough to figure out what type of terminal you need open :) )

In order to make spinning these instances up easier, we'll create a docker-compose.yml file to do the heavy lifting for us:

Breaking the compose file down:

I'm not putting a significant load on the instance I'm testing, so I only need one master instance and one worker instance. I can start that up by running the following command in the directory with my docker-compose.yml file:

If I wanted to spin up 3 worker instances, I could do that by running:

When I'm done running my tests, I can just press Control-C in the Powershell window, and Docker will spin down all the machines gracefully. These processes take almost no time (4-5 seconds total), so it's easy to spin up and down instances when needed.

Let's take a look at the locustfile first:

Locust scripts can be incredibly powerful, and include branching logic, authentication, POSTing to API endpoints, HTML parsing, and more. The documentation is good and can help you set up more complex scenarios, but let's take a look at this simple example. Our BasicTaskSet defines 3 tasks for us to run, all of which are loading a specific page in our solution. By using the @task() designator, we can specify how our traffic will be divided. In the code above, for every 6 visits, 3 visitors will go to our first task, 2 to the second task, and 1 to the third.

Our BasicTasks class also defines a min_wait and max_wait parameter. These are used to simulate random times (in our instance, between 5 and 10 seconds) to wait before performing the next task. You can use this to provide a more realistic load, simulating users reading your content before continuing on.

Let's take a look at our locust.config.json file:

This is pretty self explanatory -- we're specifying our root URL in the target parameter, and what tasks to run in the locusts parameter. You could use these values to change between environments and sites easily without modifying your underlying test scripts.

At this point, we should have the following directory structure, and our instances should be running via docker-compose up:

Let's pull up the Locust web interface by visiting http://localhost:8089, and you should be presented with this screen: 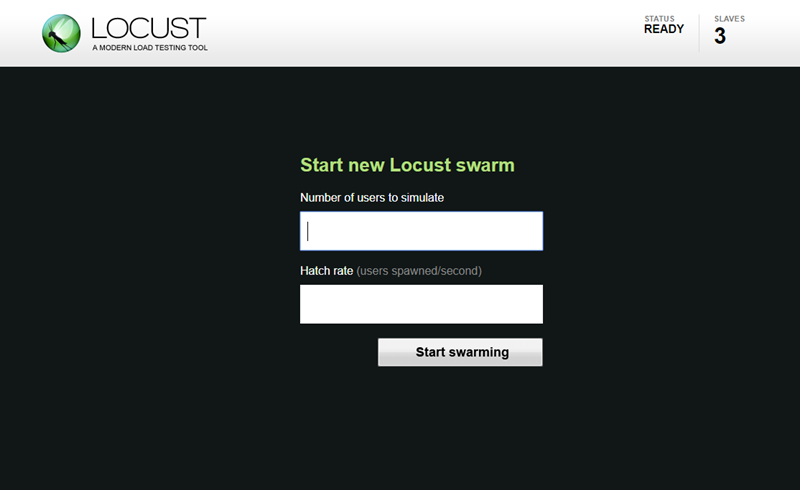 You'll determine the total number of users to simulate, and what the hatch rate is. Hatch rate will slowly ramp up the number of users in the pool until all users are online and testing. Once you hit "Start Swarming", you'll start seeing the result of the traffic: 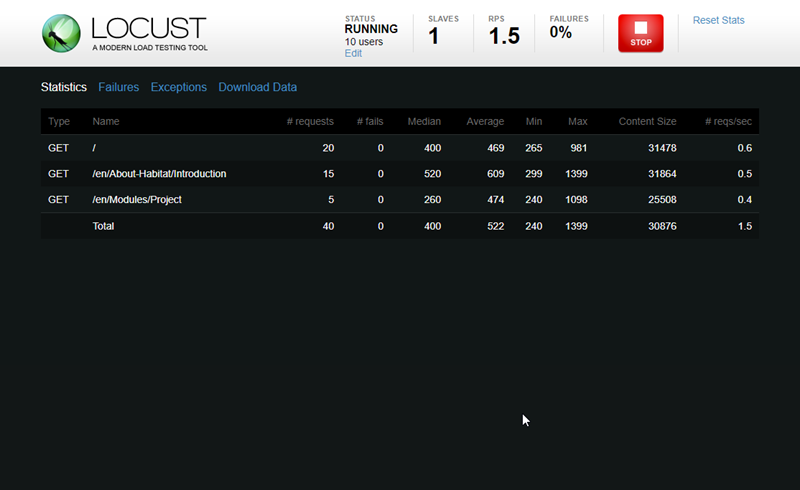 For each page, you'll be able to see the median, min and max response time (in milliseconds), the number of requests the page is seeing a second, and any number of failed requests to the page. Any exceptions or failure messages will be logged and can be viewed in the tabs at the top of the page.

When you're done testing, hit the stop button at the top of the page. You'll then be able to download CSV's of the statistics and any errors that occurred. Remember to also shut down your containers by hitting Control-C in the Powershell window.

As nice as it is to have numbers, my primary usage of Locust is to do experience testing. While the load is on the server, I'm usually browsing the site in another browser or on my phone to see what the experience of the site is like for a visitor or content author. The numbers will be helpful in determining how much load your server can take, but testing what your visitor's experience will be like under that load is equally important.

Other great uses for this type of testing?

That last bullet is where I'm hoping to go next -- I'll post any updates to my progress when I can.

I'm a huge fan of Mark Stiles' Caching Manager Module as a tool to use for tuning caches (and Mark has a great writeup of how to use it here). However, when throwing